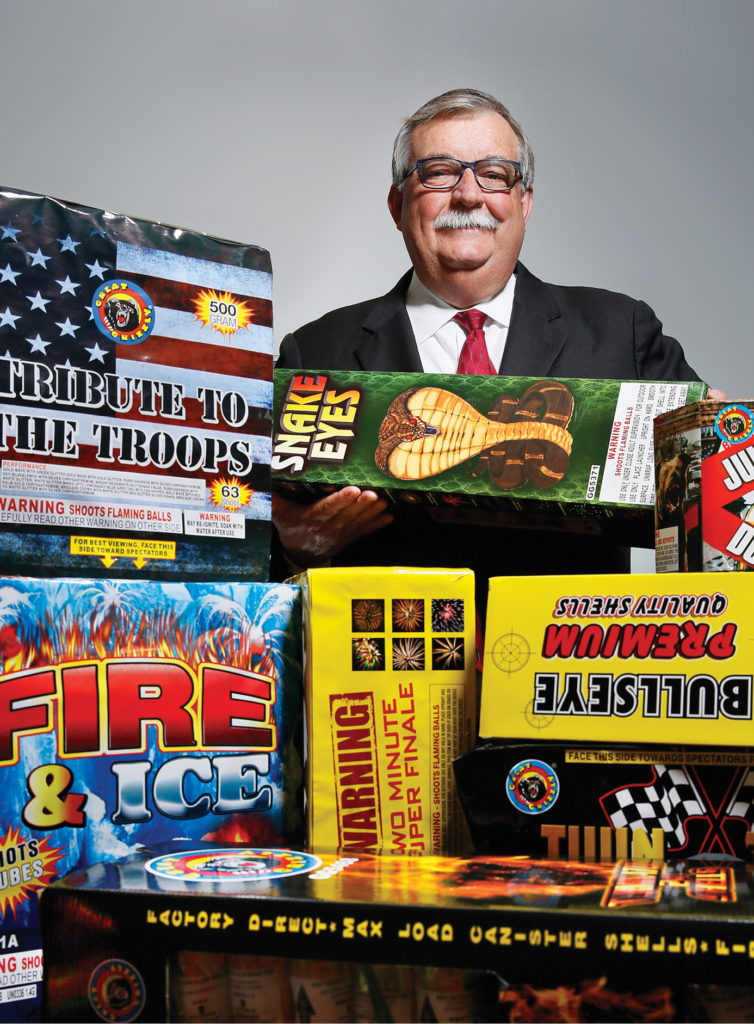 John Brooke was fresh out of law school and starting his general practice in Muncie when one of his first clients invited him to a fireworks convention. “I thought he just wanted a drinking buddy in Chicago,” says Brooke. Instead, the client, who owned a string of fireworks stands, introduced him to the pyrotechnics industry. “Guys from all over the country told me that they used lawyers all the time, but spent half of their money teaching them about the business,” Brooke says.

A fuse sparked in Brooke’s mind. Twenty-seven years later, he is one of the world’s foremost fireworks attorneys, representing retailers, wholesalers, manufacturers, and hobbyists in 48 states and 22 countries. Keeping up with the rules and restrictions, which vary across jurisdictions more than even liquor laws, is a full-time task. He knows that Iowa only allows gold-colored sparklers, while Virginia has banned whippersnappers but not fountains. He fought to repeal the Indiana law that required a signed affidavit with the purchase of rockets, promising to set them off in another state. Florida, meanwhile, still stipulates that you promise to use bottle rockets only for pest control.

He defends retailers against pyros suing for their own negligence—like lighting fireworks on their heads.

Armed with that knowledge, Brooke is a one-stop roadside tent for every combustible scenario, from consulting with fireworks shows to ensuring compliance to investigating insurance claims and defending manufacturers and retailers against pyros suing companies for their own negligence—as when they light fireworks on their heads, in their hands, or even in their posteriors. “How do you explain to the ER how you have second-degree burns on your ass?” says Brooke. “During depositions, after name and address, I ask them how much they had to drink.”

Brooke also brings firsthand knowledge to his job. He makes his own fireworks and keeps a small arsenal of store-bought ones in a barn at his Muncie home. He has lit up the skies above his three kids’ graduations and weddings. He even does an annual Fourth of July show for his hometown of Albany.

“When you feel the percussion against your chest, when it rocks the ground and you feel it all the way to your toes, you know you’re alive,” he says. “Once you smell the smoke, you never go back.”